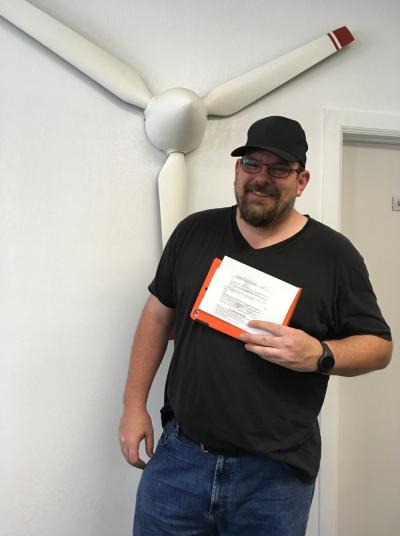 *The Training and Frustration*

I started a new job on June 12, 2017. I was having lunch with one of my new coworkers, when he mentioned he was a CFI, I said "you're my new best friend", and it reignited the drive. He recommended to just start. Start with some ground training, read some sections of Part 61, so I did, and he would quiz me on the subjects that I read. Then he had me read part 91. not certain sections, the whole thing. That's a lot of reading. Then he told me to get a few books. I took Purchased my first aviation items (PHAK and Logbook) June 29th, 2017. 5 more books on July 2nd including the Oral Guide, the FAR/AIM, ACS.

I was studying like crazy, and asked him if he could sign me off, but he was only certificated for Instrument Ground. So I bought "Sporty's Learn To Fly" on July 23rd. And scheduled 2 discovery flights at different part 61 schools. Watched all the videos in the week between 7/23 and 7/28

I was flying once or twice a week, depending on instructor availability. Then in October I didn't fly for 3 weeks. On 11/11, my CFI said he would take me out for 3 loops around the pattern, and if those looked good he would solo me and did so on 11/12 with my first solo at 21.3 hours.

By this time, I'm at 35 hours, and thinking I'm going to be really close to taking my checkride right at 41 hours. Then in January, my CFI schedule and/or the weather didn't permit flying. Then my CFI tells me he's leaving the school and going to fly imaging and introduces me to another instructor for 2 flights (1/27, 2/3).

I have a few more flights with the instructor I started flying TCY with, and some solo work. The instructor he introduced me to, doesn't work on weekends. Since I work during the week, this makes it impossible to schedule any time. So I ask a pilot buddy of mine if he can recommend anyone. He does, and we go out for a flight, March 17th at 54 hours, he tells me to schedule my checkride, so I reach out to the DPE and schedule the ride 2.5 months out (today), then I have only have one more flight with this instructor and he moved out of the area for good. I only fly 1 day the entire month of April.

7 days ago, I was at 61 hours and not signed off for the ride that was coming today. In the last week, I took 5 flights with 2 instructors and got fully signed off last night.

I thought I was scheduled for a ride at 9am. So I drive to the airport early. When I get there I see the DPE is with another person, seems to be on a re-take. My evaluation starts at 10:15. He goes through all the administrative paperwork and IACRA information,

Once that is complete, he asked if I had all the required items. Then he collects his fee and the oral portion begins. Mine was nothing like the videos I've seen and the oral prep book didn't really prep me for it either. The first question he asked was "Why are we here" see sentence 1.

We talk about the areas of the Knowledge test I missed, such as the landing performance chart. VORs and other items. He asked me to pull out the sectional and he pointed to some items on it, most I was able to explain, then he pointed to an airport with a solid thin magenta line and asked what it was. I'd never seen it before. "Um, I don't know, let me look at the key" and I can't find it there. He asked me about MOA, then showed that it was an airport in the middle of an MOA but not participating in it.

He asked me to bring up Livermore LVK and show Hotspots, I reached for my ipad and started clicking buttons and he failed the ipad right there, so I had to pick up the Chart Supplement instead. Finally find it and show him. He asked me about some airport symbols, hold short lines, and a remaining length marker. He said he was satisfied, we would take a break, grab lunch / check the weather and determine if we're going flying.

I grab a snack, call up the AWOS,

Thinking It's hot, and the winds are near my limit but I was flying in 18G25 earlier this week, but lets fly.

He tells me how the flight will be done, fly to the first or second waypoint and divert.

He has me brief the plan, and has me go pre-flight the plane. I get the pre-flight completed before he makes it out there. He walks around the plane asks me what a few of the items are such as the alternator, the steering shimmy damper, some of the antenna, counter weights. Says "Ok, lets go". As we're getting ready to enter the plane, I say "like the airlines, I have to give a passenger briefing" and go through my foreflight passenger briefing checklist.

Start the plane, get the weather again. Announce that I'm taxing to 30 via Bravo, pull up the taxi diagram and start rolling. Here someone announce closed traffic on 26, see the plane take off, and make left crosswind turn while I'm taxiing to the crossing running. Stop on the ramp announce that I'm going to re-confirm the wind and re-listen to the AWOS, winds are favoring 30 so I tell the DPE winds are favoring 30 I will continue and pay close attention to his position since we are departing straight out, there should be no factor. Go through the run-up and start the line-up checklist when he says he wants a short-field takeoff. Switch to short-field checklist, explain what I will do, then go back to normal checklist because I hadn't done the emergency briefing yet.

My intention was to fly runway heading for 7 miles which should get me to my top of climb. But we're not climbing as fast as I wanted, I know right where my first checkpoint is and can already see it, Climb checklist. I can make out my second checkpoint already. At this point, he asks me my on-course heading, I glance down at the DG and say 330. thought "CRAP, that's not right, should be 300", I forgot to set the DG once the vacuum pressure was up. I'm over my first checkpoint, but not at my altitude yet, I make the turn anyway, I can see where I need to go so I keep going. I reach 4500 feet, cruise checklist and** SET DG**. Divert to X, um, I don't know where X is, he shows me on the sectional. I reach back, grab my plotter, 68 miles, we certainly have enough fuel for that since I planned a 160 mile trip. And the heading, *HEAD DOWN* umm, 100. turn to 100, then he says, now confirm with the GPS. 094 turn 6 degrees and he terminates the navigation portion tells me to put things away.

Descend to 4000 and setup for slow flight, begin decent and say I need to do clearing turns, there is traffic near by as well as skydivers. Turns to certain degrees. 360degree clearing turn, to a power-off stall.

Go under the hood for 2 unusual attitudes, maybe one turn to heading. take hood off.

Steep Turns to the Right, then Left.

He then asks if I see a tower close in to my left. Once I spot it, he say he wants me to do "turns around a point" using that building as the point at 1000ft, I tell him since we're at 2000 ft, and the wind is coming from this direction, I'm going to do a right 360 decent combined with a clearing turn to setup for the maneuver. Now here's where I think I blow it, about half way around the circle, I notice I'm below 900 feet and I think to myself, crap I just blew it, don't say anything just fix it. Add power and climb in the turn, finish the circle and state "Maneuver complete" ok, lets go back to TCY and do some landings. (Later confirmed with CloudAhoy, I started the maneuver at about 970 feet so 875 feet is within spec)

First, a short field landing to T&G, touch down just past my intended.

Next, a regular landing to full stop taxi back. Once we taxi back, he has me do a soft-field takeoff with Vx+10 due to density altitude. Pop up into ground affect and level off until 72 before climbing out. Followed by a soft field landing, had to drag this one in with some power, but grease it on and keep the nose in the air for a long time.

And finally, forward slip to a landing, during the briefing he told me this is where a lot of checkrides fail. First attempt, I think I have a good approach, and I start slipping right rudder left aileron by 200 feet AGL, I'm too far away from the runway "Going Around"... Second attempt, same thing. Third attempt, I hear another student announce on Unicom "5 mile final RNAV approach 30", I'm on the downwind about the point I turn base, I say, "he's 5 miles out, we have plenty of room" I turn base and announce, I turn final and announce, then the other guy says "Short final 30", thinking "SHORT?!?! I'm SHORT", calmly announce "CESSNA 254 SHORT FINAL GOING AROUND", DPE says "you were too high anyway, you did the right thing" then the other guy now says "2 mile final"

On the next attempt, DPE asks, are you supposed to slip into, or against the wind, thinking "hmm, only 5 degrees off runway, but let me try the other way" right wing down, left rudder. Stays on the center line, smooth slip to almost ground effect, straighten it out and grease it on. "Head back to the FBO, you're a pilot"

When I started, I wanted the ticket by February, and when I wasn't already setup for a checkride by then I was a bit frustrated, but I was more frustrated by the downtime and delays due to unavailability of instructors and/or poor weather.

My next steps are to do some XC time building to get to 100 and prepare for instrument.

I may go get checked out at another FBO so I have more options.